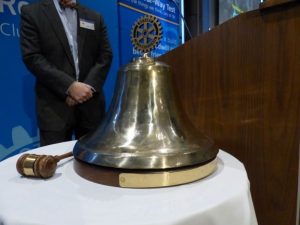 For many years our Rotary Club meetings were convened and adjourned with the ring of a stately and dignified bell that was stored in a closet behind this room and brought to the podium each week. And, then one Tuesday in 2013, the bell was gone! While its whereabouts is a still a mystery, we do believe it was stolen.

With just a few bell makers around the country, apparently quite busy with other projects, replacing the bell has proved challenging. For the last several years we have used a serviceable but inelegant, small brass bell.

While ringing this simple bell usually encourages Rotarians to move to or from the dessert table—the bell did not have a higher purpose. The ring was not inspiring. Indeed, sometimes it has been hard to hear.

Then last summer we learned that Russ Klisch, owner of Lakefront Brewery, was leading an effort to refurbish the church bells in Milwaukee. We emailed Russ who volunteered to do a bit of research.

Russ eventually led us to Tom Queoff, of Queoff Sculpture Studios, who specializes in brass sculptures—and he was just the person we needed to craft a new bell. We also needed a bell stand and for that we turned to Nick Hardrath, owner of Urban Craftsman.

As we unveiled this new bell on April 23rd, President Ed reflected on what the ringing of a bell means. In every age and country, the bell has been a universal symbol and an instrument used to communicate, notify, alarm, summon, mark the time or call to action. The sound of a bell has the power to charm, to amaze, to celebrate, to warn and to the lift the spirit. 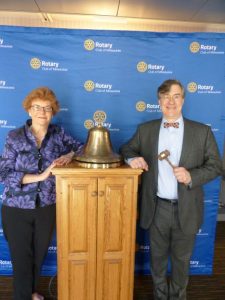 We are also going to start a new tradition. As the President rings the bell to end each meeting, instead of saying “the meeting is adjourned” s/he will say a phrase of encourages each of us to do some good in the world.

Perhaps they’ll just say: “Let’s go and do some good in the world this week,” or maybe it will be something to inspire us to build goodwill and better friendships. We will change it up and welcome each member to suggest short phrases that we could share at the end of each meeting.