In 2016, Milwaukee Rotary and the Military Service Committee first discussed the possibility of dedicating a Gold Star Families Memorial Monument at Rotary’s home, the Milwaukee County War Memorial Center. Many meetings later, and with guidance from the War Memorial’s Vice President Vicki Chappell – the monument has been approved and is planned for a July 2020 dedication at the beautiful Lake Michigan lakefront.

This initiative has truly been a perfect example of how Rotary’s CONNECTED relationships bring many people together to improve a community. 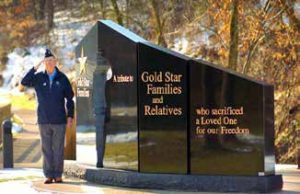 The monument comprises four separate panels made of striking thick black granite and pays tribute to U.S. families that have lost a family member in military service. It provides a permanent location for these Gold Star Families and the community to gather, honor, and remember loved ones who paid the ultimate sacrifice – in all five branches of the U.S. armed forces.

Before Woody joined the Marine Corps. in World War II, his job was to deliver Western Union telegrams informing families of the death of their loved one. After a year in this role, he noted “recognition of the families of those lost in military service was very inadequate.”

After World War II, Woody went on to serve as Chaplin of the U.S. Department of Veterans Affairs for 30 years and trained horses in his native West Virginia.

Following the vision of the Milwaukee War Memorial Center’s new Executive Director, Dan Buttery, the monument dedication will be part of kicking off the War Memorial’s celebration of the 75th anniversary of the end of World War II which will showcase Milwaukee companies that engineered and provided materials, parts, supplies, and services supporting the 1940s Word War II effort.

The proposed location of the Memorial looking south towards the War Memorial Center.

Milwaukee Rotary has generously committed to contributing $5,000 to the monument. The Wisconsin VFW, Milwaukee’s 128th Air Refueling Wing, and other groups are hosting fundraising campaigns.

In addition to Milwaukee Rotary and the Military Service Committee, Korb + Associates architectural firm has been instrumental in providing design of the plaza and working with Gestra Engineering, Thornton Tomasetti developers, Pinnacle Engineering, and Nelson Schmidt marketing which are all providing free materials and services. These remarkably generous in-kind contributions represent over $35,000. Currently, the Bradley Foundation, Rockwell Automation, Baird, Michels Corporation, and others are reviewing participation.