Rotary’s Board of Directors agreed to sponsor the Milwaukee Film Festival at the $5,000 level for the second year in a row assuming we were offered the chance to sponsor a film that aligned with Rotary values. And they did!

We will be the Silver Sponsor of an education focused documentary, PERSONAL STATEMENT (Directed by Juliane Dressner). You can read a description of the film below:

“Follow Karoline, Enoch, and Christine – three college-bound Brooklyn-based high school seniors who want to bring all of their classmates along with them. Recognizing the lack of college guidance support in their classrooms (much the same across the country), they become the change they seek, counseling their peers through the college entrance process. An inspiring look at social justice in action, PERSONAL STATEMENT reminds us of the immense change we are all capable of creating around us.” 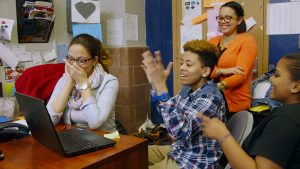 Students featured in the documentary.

The film will screen once at three different locations and times.

We have 25 pairs of tickets to the October 27th screening which we will give to members on a first come first serve basis. Call or email the Rotary office to reserve your tickets.