CONNECTING
Rotary Person of the Year

2022 Rotary Person of the Year 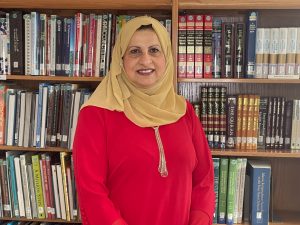 The Rotary Club of Milwaukee has no higher honor than the Rotary Person of the Year Award.  Annually, our club honors an accomplished local individual who has distinguished herself or himself with professional accomplishments. Unlike other awards that recognize civic and philanthropic achievements, the Rotary Person of the Year honors leaders who build, employ, and have an economic impact in our region.  Members of our club are eligible for the award, but, most often, the winner comes from outside the club.

Three years ago, Janan started Our Peaceful Home, a state funded and culturally specific family strengthening and domestic violence program.  With the increase of Islamophobia in the political sphere, Janan founded the Wisconsin Muslim Civic Alliance, to help American Muslims in Wisconsin be part of the political process.

She chairs the Committee for Interfaith Understanding of the Interfaith Conference of Greater Milwaukee, she is a commissioner with the Milwaukee Commission on Domestic Violence and Sexual Assault, a member of the MICAH Religious Leaders Caucus and long-time co-chair of the Dr. Martin Luther King, Jr., city celebration.

Janan has been involved with different waves of refugee resettlement.  In 2020, she was one of the only community representatives in the state to be invited by elected official to tour For McCoy and be part of high-level briefings on the condition of recent Afghan evacuees. Her organization helped mobilize community support and shipped truckloads of new supplies to For McCoy for Afghans detained there.

As hundreds of Afghans were being settled in the Greater Milwaukee area, Janan created a “buddy” program matching Afghan youth with American youth to help them navigate culture and build friendships

Janan has spent her career building bridges and helping people to understand the gentle nature of the Muslim faith and identity.  She’s done so with grace, intelligence, and patience all the while helping Muslim women in our community and abroad.